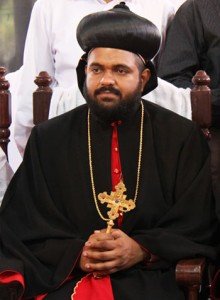 From a very young age itself he was greatly involved in religious affairs. It was at the age of seven, that he came to Kyomtha Seminary, Thiuvankulam with his grand uncle Mor Osthathios Thomas. He completed primary and secondary school education from Georgian Academy English Medium School, Thiruvankulam and high school from RMHS Vadavucode. Later he attained graduation in Economics from St. Alberts College, Ernakulam and Post-graduation from Kerala University. He also graduated in Library Science from Indira Gandhi National Open University, New Delhi.

He was ordained a Sub-Deacon (Kooryoo) by late lamented Mor Osthatheos Thomas Metropolitan on 13th May 1993 and the Fifth order of Priesthood (Auyfatheachno) by His Grace Mor Gregorios Joseph, the present Metropolitan of Kochi diocese. He served as the secretary of the Metropolitans Their Graces Late Lamented Mor Osthathios Thomas and Mor Gregorios. After completing secular education, he graduated in theology from M.S.O.T. Seminary, Udayagiri, Vettikkal. Later on he took diploma in, Syriac language and Liturgy, from the St. Aphrem Theological Seminary, Damascus, Syria.  During this period he served as the secretary to His Holiness Moran Mor Ignatius Zakka-I Iwas, the Patriarch of Antioch and all the East. During the third Apostolic visit of His Holiness to India in 2004, Deacon Saji, as the Metropolitan was known earlier, accompanied His Holiness as the secretary of His Holiness for the church affairs in India. Later he continued the Syriac studies in Kurkumo Dayro, Mardin, Turkey. During these days he had opportunity to visit almost all the Monasteries in Turkey.

He was ordained a full Deacon (Samshoono) by His Grace Mor Athanasious Geevarghese, the former secretary to His Holiness The Patriarch. On 12th November 2006 His Holiness Moran Mor Ignatius Zakka-I Iwas, the Prince Patriarch of Antioch and all the East ordained him a priest (Kassisso) at the St. Peter’s & St. Paul’s Cathedral in Damascus. Later he served as the Vicar of St. George Jacobite Syrian Cathedral, Karingachira, Ernakulam. At the time of his Metropolitan consecration he was serving the Suryoyo parishes under His Eminence Mor Koorilose Aphrem Karim, the Archbishop of The Eastern United States. Currently he is pursuing his Masters in Sacramental Theology at Holy Cross Greek Orthodox Theological Seminary, Boston, Massachusetts USA.

Following his selection to high priesthood in December 2009 by the Malankara Episcopal synod and the respective general bodies of the church in India, his name was forwarded to the Supreme head of the Universal Syriac Orthodox Church, the Patriarch of Antioch & All the East, which was eventually approved by His Holiness. On 2nd January 2010 he was consecrated  a monk (Ramban) along with Fr. Zachraia Therambil by names Aphroth and Sabor respectively by His Beatitude the Catholicos.

On January4, 2010, His Beatitude the Catholicos Baselios Thomas-I, assisted by metropolitans from India, consecrated him a Metropolitan by name OSTHATHEOS at a divine ceremony held at the St. Athanasious Cathedral in the Malankara Syrian Church headquarters, Puthencuriz.  On ordination the new metropolitan was given charge of the Mylapore diocese which was earlier known as Chennai diocese.  Mor Philoxinos Zacharias Therambil was also ordained a Metropolitan, for the Malabar diocese, along with Mor Osthathios during the same ceremony.

On January 23, 2010, Issac Mor Osthatheos along with Mor Philoxinos Zacharias visited the Patriarchate in Damascus and submitted Salmoosa (obedience in writing) to His Holiness following which The Patriarch issued Susthathikkon to the new metropolitans.  Later they also visited the Holy city of Jerusalem before returning to India.

The Sunthroniso (the official ceremony of assuming the diocesan charge) of Issac Mor Osthatheos was held on Sunday the 21st February 2010 at the St. Thomas church in Annanagar, Chennai. The holy ceremony was led by His Beatitude the Catholicos Mor Baselios Thomas-I, the visiting Suryoyo Metropolitans Mor Dionsyius Behanan Jajawi (retd.), Mor Osthatheos Matta Roham (Jazirah & Euphrates) and other Metropolitans of the Malankara Church. 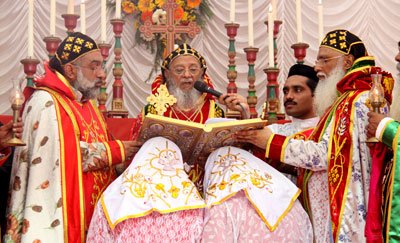 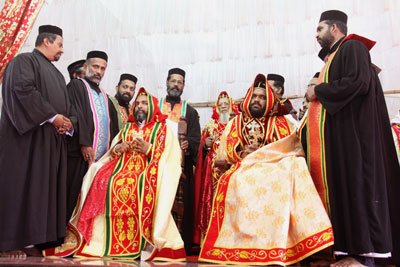