The term ‘Catholicos’ (Katholikos) is derived from the Greek words ‘Kath-Holikos’, meaning ‘General Primate’ or ‘General Vicar’. Even before the primates of the Church adopted this title, it existed in the Roman Empire where its Government representative who was in charge of a large area was called ‘Catholicos’. The Government servant, who was in charge of State treasury, too was known by that name. In due course, the secular administrative heads in Persian Empire also adopted this title. 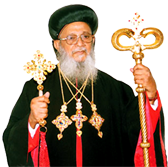 The Churches (mainly outside the Roman Empire) started to use this term for their Chief Bishops much later, probably by 4th or 5th centuries. Now the primates of the Orthodox Churches in Armenia, Georgia, Iraq and India, use the title ‘Catholicos’.

‘Maphryono’ (Maphrian) is derived from the Syriac word afri, “to make fruitful’, or “one who gives fecundity”. This title came to be used exclusively for the head of the Syrian Orthodox Church in the East (Persia) after the prelates who occupied the office of the Catholicate since late 5th century adopted Nestorian Christology and separated from the mother Church. From the mid 13th century onwards, a few occupants of the Maphrianate were referred also as ‘Catholicos’, but the title never came into extensive usage. However in the 20th century when this office of the Maphrianate under the Holy See of Antioch was established in India, the chief of the local church assumed the title ‘Catholicos’. It is this title that is being used in India today, while the title ‘Maphryono’ (Maphrian) is no longer used.