The book of Acts in its exposition with regard to the rank accorded to St.Peter. St.Peter took up the leadership of the Church of Jerusalem after Christ’s Crucifixion and resurrection. Even when he was with Jesus as one the twelve disciples, St.Peter acted as the Chief, emissary and spokesperson of the lot. His primacy is underscored biblically which leaves no room to doubt otherwise. By 37 AD Antioch became the capital of the universal Church and St.Peter, its head. 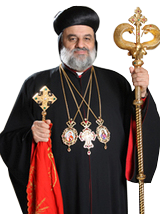 The Patriarch since St. Peter has assumed the leadership of the Church and had make use of Antioch as the capital to lead the Church, those who are ordained as Patriarchs by the church to succeed St.Peter are no doubt the successors and emissaries of St.Peter. The divine grace is handed down from Jesus to St.Peter, St.Peter to his successors the Metropolitans to Priests, and from Priests to the laity. Thus in the Syrian Orthodox Church the Patriarch represents the first and the foremost link in respect of the apostolic succession and divine priesthood. The universal Syrian Orthodox Church perceives its strength and Unity in His Holiness the Patriarch, the supreme head of the Church. As the Sucessor of the St.Peter, His Holiness is the embodiment and symbol of unity of the universal Syrian Orthodox Church. This embodiment signifies two type of representative characters. Firstly, as the successor of St.Peter, the patriarch represent him.

As St.Peter is the chief shepherd and supreme head, the Patriarch by virtue of his position upholds the unity of the Universal Syrian Orthodox Church. Since the Patrirach’s ordination and conornation are deemed to be through the grace of the Holy Ghost and by the will of God, the first representative character is bestowed from above and is divine. So the Patriarch as the high priest the Universal Church, represents Jesus Christ when he celebrates the Holy Eucharist. Secondly the Patriarch as the chief Shepherd of the Church, is the emissary of the entire body of believers. The church is not only an invisible spiritual fellowship but is also a historical reality. So, all the attributes of the Church like one, Holy, Chatholic and Apostolic must also become a historical reality. And the Patriarchs who are ordained from time to time and represent the universal Syrian Church as the Supreme heads, make the unity of the Church a reality.